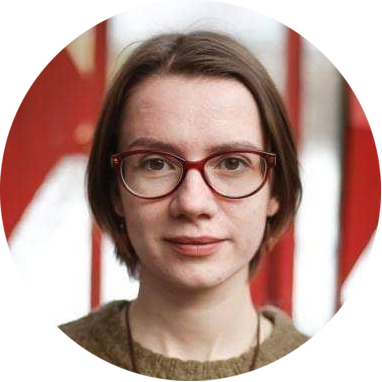 She was born in 1993 in the Zhirovichi village, Slonimsky district, Hrodna region. Graduated from the Belarusian Economic State University and the Belarusian Collegium (specialty "Philosophy and literature").

In 2021, the publishing house "Yanushkevich" published the debut book of the poet called "Tears to the wind".

Participant of various literary performances in Belarus, Ukraine and Russia, the festival "Poems on the pavement", the "Mystetskiy Festival" (Ternopil, Ukraine), winner of the slams "Strong Word" (2014) and the slam of the Belarusian Collegium (2015), one of the organizers of the poetry performances "Bad Good Poems", "Dear Poet" and the poetry contest "Rukhavik". Nominee for "Zalaty Apostraf" Award of the "Dziejasloŭ" magazine (2017). Finalist of Belarusian-German contemporary poetry competition of the Robert Bosch Foundation for young poets (2017). Participant of the Residence of a young writer in Vilnius (2017).

Some of Darja Bialkievich's poems are embodied in songs, such musicians as Palina, Pyotr Klyuev, UZARI, K3TYVAN, Lear, the group "Dremony" sing songs to the texts or translations of the poet.

Her poems were translated into German, Russian and Ukrainian.